Here is how Dubai celebrated the Chinese New Year

Here is how Dubai celebrated the Chinese New Year 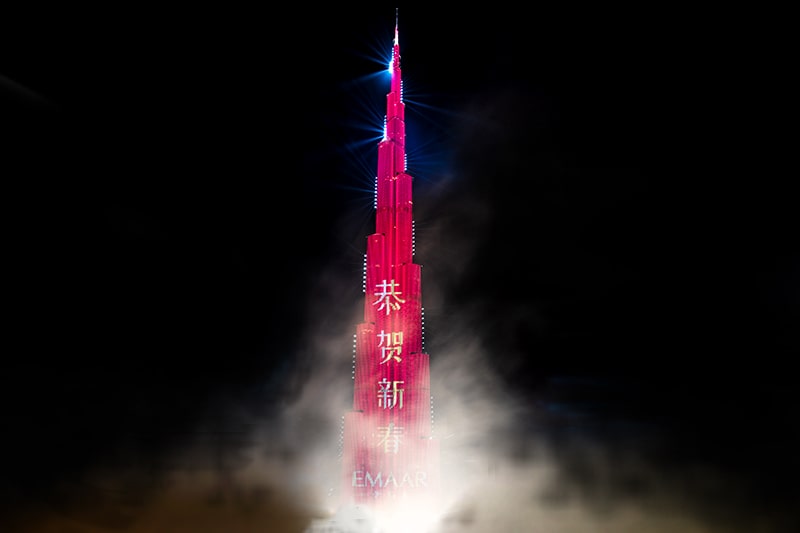 The Chinese New Year is finally here, and millions around the world are enjoying two weeks of celebrations including Dubai. Every year Chinese residents in the UAE gather to celebrate the Lunar New Year, with around 250,000 Chinese nationals in Dubai and around 100,000+ tourists visiting the city during the Lunar New Year celebrations, Dubai made sure it had lot to offer. Traditional festivities took place in several locations in Dubai which included Chinese dragon dancing, kung fu acrobatics, drumming and much more. Here in this short article we will list few of our top picks of unique ways Dubai celebrated the Chinese New Year.

The iconic skyscraper did host an unforgettable Chinese New Year Lightshow for 3 days, visitors witnessed a new light and sound show that paid tribute to the Chinese residents and visitors in UAE. This amazing show featured a unique dragon theme that kept the Chinese vibe alive in the city. The audience favorite scene featured a Chinese boy decorating a peach blossom and hanging a lantern on a tree, he was later joined by an Emirati child on screen who invited him to visit his Emirati family and the Chinese boy gifted the family a red envelope, a Chinese tradition on New Year.

The highlight of the celebrations this year  was a 20,000-strong colourful Grand Parade at City Walk, starring enormous dragons, acrobatic performers, magicians, kung fu fighters, Sichuan dancers and much more. The three-hour parade took place along Al Mustaqabal Street and truly made the celebrations authentic.

Riverland at Dubai Parks and Resorts was decked with traditional red and gold lanterns, the Resort also hosted different entertainers such as dragon dancers. It was a memorable occasion for families especially as they took part in activities such Couplet Pasting to pass wishes for the New Year and joining a tea ceremony. The event also included a festive market where visitors could shop for fine Chinese arts, handmade crafts and gifts, and of course a stunning fireworks show on the main night of the Lunar New Year.

JBR also celebrated Chinese New Year by hosting series of performances such as an ancient Chinese dramatic art by Bian Lian, face-changing and a dragon show. The event also featured a Chinese themed market that offered Chinese crafts and gifts.

On New Year’s evening, visitors enjoyed amazing view of Burj Khalifa light show from various restaurants in the mall facing the Burj or from the famous Dubai fountain.

Emaar the developer behind most of the city's Chinese New Year celebrations didn't stop only by hosting Burj Khalifa light show and various other shows and events, but the developer also offered investors an irresistible new year offer that will last for the full month of February on selected projects. This offer will include:

We hope that this short article was helpful, most of the events above will continue to take place till the end of February so feel free to pay the locations a visit if you have missed any and live the celebrations to the fullest.

Finally let us know in the comment section below how did you celebrate the Chinese New Year?

Want to speak to our agents?

7 Reasons why you should invest with Emaar Properties

A step by step guide to moving to Dubai

Request Callback
Fill the following in order for us to call you back.